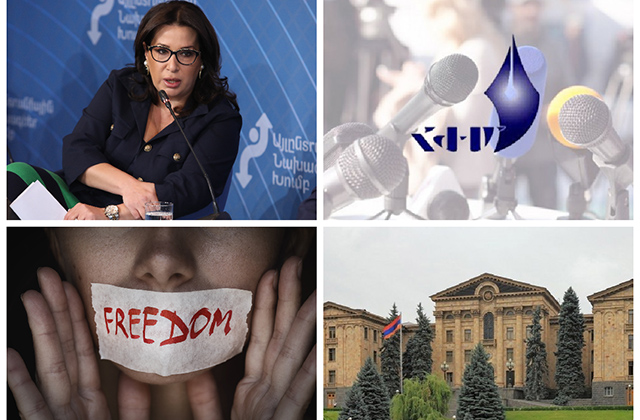 Members of the ruling Civil Contract faction in National Assembly, Artur Hovhannisyan and Lilit Minasyan, have put forward a bill propsoing amendments to the law “On Mass Media”. The measure, if adopted, will enable government institutions to suspend the accreditation of a journalist or journalists.

In their justification, the lawmakers have pointed out to the following:

Given the consistent and coordinated steps  by the ruling authorities against freedom of the press and speech, and the range of problematic initiatives (in terms of  the fundamental and democratic rights and liberties) for restricting the activity of the media  in the previous period, we have grounds to assume that this particular bill, initiated by lawmakers of the ruling faction in National Assembly, is not a spontaneous campaign but rather – the expression of a political decision which falls within the logic of the government policies against independent media outlets.

This change may serve as a club for the government agencies, allowing them to deprive non-desirable journalists of accreditation.  In this way, the authorities and government institutions will further detach themselves from their obligation of public oversight and accountability, which they are trying to avoid in every possible way by initiatives of the kind.

The Union of Journalists of Armenia condemns the latest in this series of acts by the authorities (which is against freedom of speech and the press), urging the government to give a negative conclusion to the draft law in question. Otherwise, the presumptions that the initiative is the result of a political decision and was brought to the public eye as a result of a political order will be affirmed.

At the same time, we draw the attention of the NGOs, international organizations and insitutions dealing with freedom of speech and the press to prevent the latest in the series of initiatives directed against freedom of the press. If brought to life, it will further deteriorate the level of democracy in Armenia (which isn’t favorable as it is).

The Union of Journalists of Armenia urges the authorities, yet another time, to end the campaign against freedom of speech and the press, and the practice of restricting, through most different initiatives, the activity of the media, which is step by step detaching Armenia from democracy.