The Union of Journalists of Armenia calls on partner journalistic organizations, all mass media to adequately cover the events taking place in Artsakh 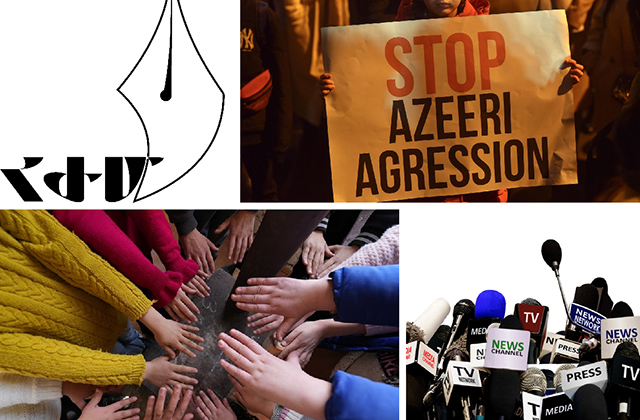 Since December 12, the Azerbaijani authorities, under the guise of fake “environmental” activists, have blocked the only road connecting Artsakh (Nagorno Karabakh) to Armenia and the world, Lachin Corridor, which is rightly called the “road of life”. 120 thousand people living in Artsakh, including 30 thousand children, found themselves in the conditions of a real humanitarian disaster, being deprived of food, fuel, medicine. In Artsakh, at the moment, there are more than a dozen intensive care patients in serious or extremely serious condition, who need to be immediately transferred to Yerevan and receive specialized treatment. Moreover, one of the patients in such conditions died because of not being able to be transported to Yerevan and at the moment, a 4-month-old is in a critical condition, a child…

The range of humanitarian and existential problems caused by the closure of the Lachin Corridor is very long. All these different examples, however, are united by a terrible reality: in the 21st century, 120,000 people have been living under siege for 10 days in front of the civilized world which at best declares their concerns without practical attempts to resolve those concerns.

The inaction of the international community and the policy that puts geopolitical interests above the right to live, among other human rights, also contribute to the relative silence of the world press and indifference to the events taking place in Artsakh.

In the past days, we were looking forward to our partners from all countries, regardless of the politics of their home countries, would cover the events taking place in Artsakh and around Artsakh, show in live broadcasts and reports how ethnic cleansing is being carried out in real time, and how people live under this daily threat of genocide. Unfortunately, however, from our colleagues who put “human stories” above all else, for ten days we never saw the story of a single person who is condemned to a slow death because of the lack of necessary medical care. We barely find any truly caring stories of little children trapped in the blockade crying while waiting for their parents on the other side of the road… In the case when they are the same kind of children or patients whose stories are presented today in almost every media outlet in the world. It’s just that this particular conflict, because of which the people of Artsakh have found themselves in that situation, has less geopolitical weight than other conflicts.

During the past 10 days, the Union of Journalists of Armenia expected and still believes that human life and fundamental human rights are above any geopolitical interest for partner structures and media, and that they are committed to our professional mission to cover the stories of people condemned to suffering.

The Union of Journalists of Armenia calls on partner journalistic organizations, all mass media to adequately cover the events taking place in Artsakh, the actions condemning Artsakh to a humanitarian disaster and through public pressure to try to influence the political decision-makers who will be able to use the appropriate tools to force Azerbaijan to open the road of life in Artsakh, which every day threatens to turn into the road of death.

The Union of Journalists of Armenia is willing to provide all necessary support to foreign journalists and news organizations in covering events in Artsakh. We call and ask our colleagues, representatives of all nations, to speak and write about the one and the 120,000 people under siege in Artsakh and not to allow our silence to encourage the Azerbaijani authorities who are carrying out an attempt of ethnic cleansing.