Ani Gevorgyan: “Do you really think you are the one to decide instead of me with which MP I can talk? This is a war not only against journalists and media, but against the society as well” 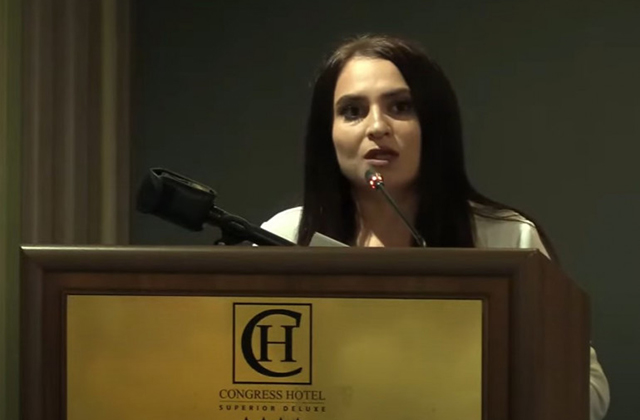 “It turns out lots of mines have been installed for us, most of which we, as journalists, are not aware of. We need to be ready for self-protection too because we are the primary target,” said Ani Gevorgyan, journalist of Armnews and Tert.am news agencies during a discussion entitled “Against media restrictions, for the sake of free speech and the right to be informed” organized by the Union of Journalists of Armenia.

She says that since the beginning of August they work in conditions of extreme limitations.

“Every second they are trying to interfere with our work, and prevent us from carrying out our duties freely: they tell us not to approach MPs, not to pass close to them. Even that is done often not only by security guards, but by others as well, through using psychological methods of influence. They may tell you that you don’t need that, they are using you for political purposes, etc. When we try to ask a second question, they start blaming us of getting involved in politics,” said Ani Gevorgyan and added that this kind of limitation often relates to the reaction of journalists to anti-Armenian statements by MPs.

Journalists do not agree with the idea that the society lacks patriotism, does not have feelings of patriotism towards its territories, and from that point of view they are trying to tap the moods in the parliament.

When it comes to limitations of their work, the management of the national Assembly brings the example of security measures, the case of Nairi Hunanyan or the attack on Ararat Mirzoyan, but they forget that Mirzoyan was not attacked by jorunalists, and that Nairi Hunanyan was not a journalist accredited at the parliament. This means that those explanations are baseless.

“There are cases when MPs tell us that it is better to do the interview in their offices, but security guards do not let us get in,” said Ani Gevorgyan.

The journalist does not think it is comfortable to interview MPs in the room of briefings at the parliament.

More details are available in this video