We condemn: Statement by the Union of Journalists of Armenia and the media 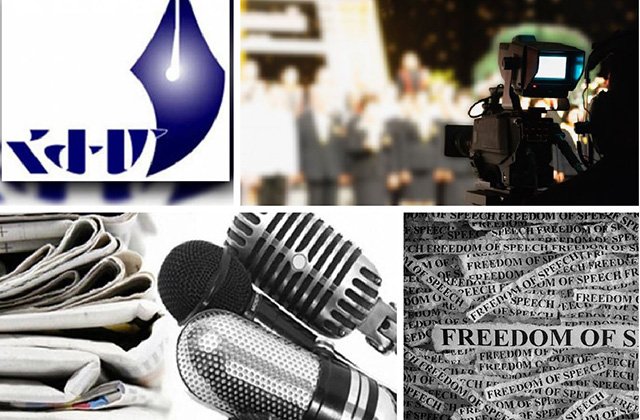 On 8 October 2020, the Government of the Republic of Armenia adopted Decision N 1655-N on making supplements to Decision N 1586-N of 27 September 2020; according to those supplements, the publication of reports (including speeches, publications) criticizing, refuting the actions of state and local self-government bodies (LSG) and officials for ensuring the legal regime of martial law and ensuring state security, questioning the effectiveness of those actions or devaluing those actions in any other way shall be prohibited.

This was followed by the package of draft laws on making amendments to the Code of Administrative Offenses and the Criminal Code, which envisage administrative liability and criminal liability for violating the restrictions, respectively. The tremendous amounts of fines set for mass media outlets may be problematic from the perspective of several principles, including the principle of proportionality.

The specified amendments violate freedom of expression envisaged by the Constitution and are not proportionate to the legitimate goal that is being pursued.

By the aforementioned amendments, the Government sets an absolute prohibition on the publication of any category of a report (including speeches, publications) that criticizes, refutes, questions or in any other way devalues the effectiveness of the actions of state and local self-government bodies and officials, and this absolute prohibition is being set when making the discussions on the effectiveness of the actions taken and drawing the right conclusions serve as the guarantee for ensuring military successes and state security.

According to the case law of the European Court of Human Rights, the “necessity” for any restriction on freedom of expression must be convincingly established. The national authorities must convincingly justify that there is a “pressing social need” for the restriction. The legal regulations that absolutely and unreservedly prohibit the dissemination of information with the pretext of national security and rule out public oversight over and criticism of the actions and decisions of officials in regard to the life and welfare of people, are a violation of the right to freedom of expression.

Thus, the aforementioned amendments of the incumbent authorities disproportionately restrict freedom of expression, deprive citizens of the right to express opinions on and receive information about issues of great public importance and national security issues, and they also contradict the international commitments assumed by the state and the approaches of democratic states.

The authorities have not only failed to present substantiated reasons for these amendments, but they may also create the impression that these amendments are being made for totally different purposes.

Based on the package of bills, a tremendous fine in the amount of Armenian drams of the Republic of Armenia is envisaged for violation by the media of the rules for publishing or disseminating information during the legal regime of martial law. The amounts of fines set for mass media outlets may be problematic from the perspectives of the principles of lawfulness and proportionality.

During martial law, the mass media outlets of Armenia not only observed the restrictions conditioned by martial law, but also collaborated with the relevant bodies, realizing the importance of the situation created in the country, as well as the responsibility for their work and all the subtleties of issues related to security. The interpretations of the authorities of the reason for these amendments are unsubstantiated and arbitrary.

The Union of Journalists of Armenia and the media strictly condemn these Decisions of the authorities and record that these amendments pose a serious threat to freedom of speech, freedom of expression, access to information and public interest.

We call on the relevant authorities to not cause unnecessary trouble for the media during these already tense days and to clarify the specific rules for publication or dissemination of information by the implementer of media activities during martial law, in the case of violation of which fines have been imposed. Media outlets need to be clearly informed about the details of those rules in order for them to prevent possible violation instead of being held liable after publication. Otherwise, the notices sent and visits paid to media outlets by law-enforcement authorities (including unannounced) leave the impression of discriminatory and arbitrary approaches, especially when they are not equally applied to all media outlets.

The statement has been signed by: