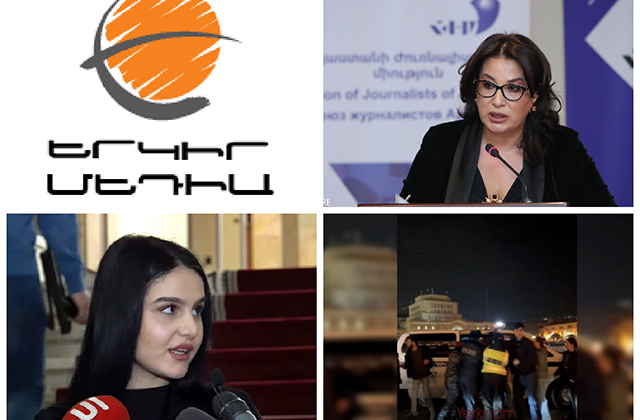 Last evening, during a demonstration that was being held against Azerbaijani delegates of Euronest Parliamentary Assembly in front of Armenia Marriott Hotel in Yerevan, police apprehended 25 young people, including journalist for Yerkir Media Ani Nahapetyan.

At the moment of her apprehension, Nahapetyan was performing her professional duty, her press badge was in an externally visible section, and even though she had informed police officers that she was a journalist, the police officers, by grossly violating the law, pushing and shoving her and offending her, took her to the police station and launched a criminal case under the elements of hooliganism.

The Union of Journalists of Armenia strictly condemns any act aimed at obstructing the professional activities of journalists.

A journalist is free to provide coverage of any event (including and especially a demonstration, a protest or other event in any other format for expressing public discontent) anywhere, with his or her preferred toolkit and with preferred trajectory of movement.

We call on law-enforcement authorities to show restraint and tolerance and not exceed the powers that are a part of the official duties.