Why do the authorities want to get rid of free press and free speech? 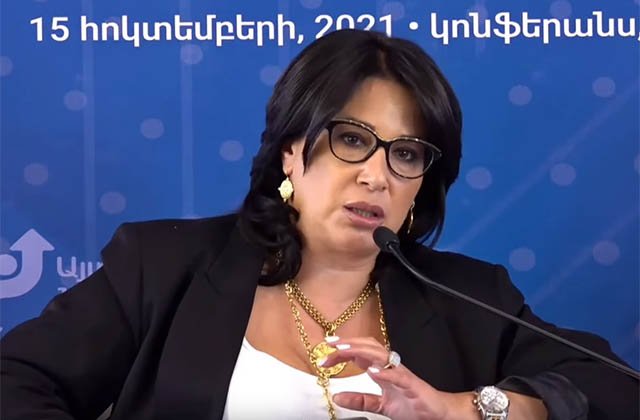 During yesterday’s panel discussion hosted by the Alternative Projects Group and entitled “To Dictatorship: Regression from Rights”, President of the Union of Journalists of Armenia Satik Seyranyan stated that hostility is being generated towards the press in public moods, social media and other platforms, and one gets the impression that the incumbent authorities of Armenia might soon declare the press and free speech a classificatory enemy that is disturbing the authorities to implement their beloved “steel mandate”.

Satik Seyranyan also stated that the situation regarding the press concerns journalists only at first sight and that, in reality, this is an exclusively political matter and is a reflection of the attitude of the incumbent authorities of the Republic of Armenia towards democracy, human rights and freedoms.

According to her, the deep cause of this situation is the fact that a system that is democratic in terms of form and authoritarian and dictatorial in terms of substance has become established and is growing deeper in Armenia, and free speech and free press are enemies of this system.

Below is the speech by Satik Seyranyan in its entirety:

“The actions that the authorities have been taking against freedom of speech and the press over the past three-and-a-half years, but especially during the war are strictly coordinated and consistent.

The authorities are fighting against the press in several dimensions at once, including legislation, finance (this is a result of legislation), but also equally at the level of propaganda.

With various legislative initiatives that clearly contradict the universal norms of and constitutional rights to freedom of speech, an attempt is being made to silence the press and make it controllable on the one hand, and deprive the press of the already scarce financial resources and sources on the other hand.

This concerns the well-known amendments made to the Law on Advertising, as well as the sensational law on multiplying the sanctions imposed for insult and defamation which was also officially legitimized by the Constitutional Court recently.

Alongside all this, there is also a latent struggle against free speech and free press in the field of propaganda, the authorities, in essence, have declared the press a classificatory enemy and, through various measures, they are trying to form among society the stereotype that the media are disturbing the efforts of the authorities to work and make the country flourish and grow.

However, it is extremely important to record the fact that the campaign against the press is mainly targeted at freedom of speech in general, not certain media outlets, and it fits in the general policy of establishing an authoritarian and dictatorial power. The incumbent authorities are trying to eliminate all the sub-systems of the public governance system through which the function of oversight over the authorities may be performed, even to a small extent, and they are trying to ensure the existence of checks and balances, which lie at the core of a democratic system.

Civil society is almost absent and deformed, and in these conditions, the press has remained the only system that is performing that function; thus, the zeal of the authorities in the fight against the media is fully comprehensible. The press is one of the few counterbalances that obstructs the aspirations to achieve power that is single-handed and beyond real control. Consequently, if the authorities succeed in leading their campaign against the press, Armenia will steadfastly move towards dictatorship.

One of the subtleties of the current situation is that, in practice, the press or media outlets are alone and, in essence, they don’t have allies in the fight against the arbitrariness of the authorities. Whereas civil society representatives and relevant international organizations in Armenia and abroad used to actively play this role in the past, today, almost all of them are silent, and with their silence, they are encouraging the authorities to continue their victory campaign against the press even more. However, it is also necessary to record that, in honor of our several partners, most independent media outlets are persistent to carry out their mission and continue to work every day amid the restrictions, which are growing in number.

In this sense, the press plays a key role and serves as a major bulwark on the path leading to dictatorship. I would like to express hope that the press will not remain alone in the implementation of this major mission as it is today and will have allies to implement the difficult task of turning Armenia into a truly democratic state.”