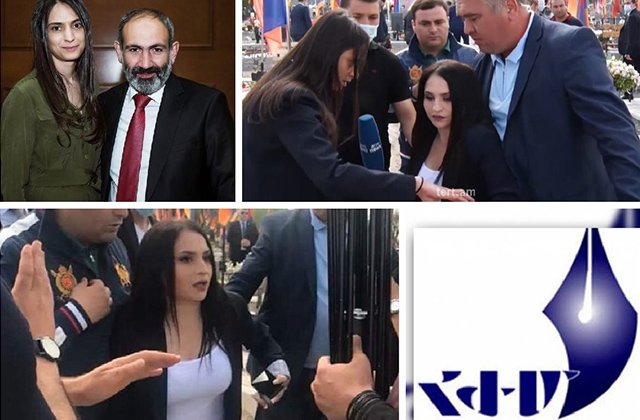 The incumbent authorities of Armenia continue with their already overt practice of obstructing the professional activities of journalists, and this is targeted against freedom of speech and press freedom.

A regular, yet unusual and sensational incident took place on May 9 when Ani Gevorgyan, a journalist for ArmNews TV and Tert.am news website, asked acting Prime Minister of Armenia Nikol Pashinyan a question at Yerablur Military Pantheon. The journalist’s attempts to approach Pashinyan were prevented by several police officers and security officers dressed in uniforms, as well as civilians who were dressed in sportswear and are ensuring Pashinyan’s security with a status and on a basis not known to the public.
Pashinyan’s press secretary Mane Gevorgyan also got involved in the incident, and several disseminated videos show Mane Gevorgyan rudely pushing and shoving the journalist and holding her hand.

After the act committed by Pashinyan’s press secretary, police officers restricted the freedom of movement of Ani Gevorgyan and representatives of News.am news website at Yerablur Military Pantheon.

Moreover, various media representatives have sounded alarms about Mane Gevorgyan working selectively and disrespectfully and behaving in a way that is not appropriate for a state official, and there have been several cases.

The Union of Journalists of Armenia strictly condemns the intolerance of the authorities towards freedom of speech and press freedom, and the press secretary of the Prime Minister who is ex-officio the person who has duties to work with the press and is paid with public funds, has also become intolerant towards freedom of speech and press freedom.
With this kind of behavior, Mane Gevorgyan has grossly violated all the rules of professional ethics.

The Union of Journalists of Armenia demands an official investigation into the actions of Mane Gevorgyan, along with all the consequences that will arise from the investigation.
Simultaneously, the Union of Journalists of Armenia records that such assaults against the press, especially before the elections, are manifestations of the undemocratic behavior of the authorities, and these manifestations are even more inadmissible and dangerous during electoral processes.

The authorities have actually launched a campaign against the press, and recently, this is particularly expressed in the public speeches of Members of Parliament and government officials, including Nikol Pashinyan. In their speeches, they target the press and journalists and set an example for the members of their team; the almost similar remarks that several government officials have been making against the press over the past few days, labeling the press in different ways, leave reasonable doubt about what is happening (this is a campaign against freedom of speech and press freedom that is being led as a result of a political decision).

Condemning what happened, the Union of Journalists of Armenia calls the attention of its partnering international organizations to the incident in order to rule out the repetition of similar incidents in the future through solidarity of the journalistic community.

There is no alternative to freedom of speech and press freedom in Armenia, and no assault of the authorities can cast a shade on the invaluable work that the media and journalists are doing, especially in this critical phase that the country is in.